Posted on October 5, 2016 by ends and beginnings blog 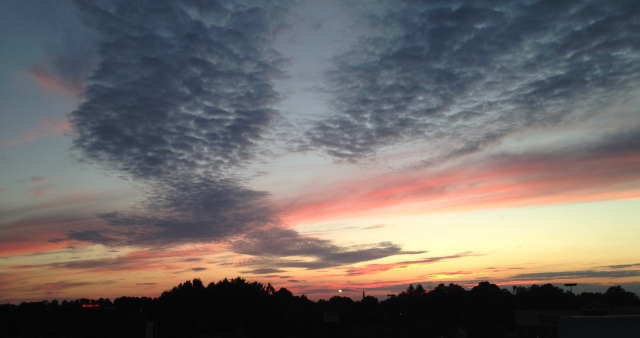 Photo credit the author of Ends and Beginnings

“Every moment of light and dark is a miracle.” –  Walt Whitman

My cycling season is winding down, that is, the opportunity to get a ride in after work. We made it back to the car yesterday at around 7:15 pm. By the time we got our clothes changed and the bikes loaded up it was 7:30 pm and pitch black dark. Depressing.

As the daylight fades my riding will be relegated to Saturday’s and Sunday’s. I might be able to sneak the occasional ride in during the week but once daylight savings expires that means being off the bike by 5 pm or so. Very depressing.

I am a sunshine guy and will mourn the arrival of Sunday, November 6, 2016 and will begin counting down the days to Sunday, March 12, 2017, the next daylight savings. Four months, four months of enduring the dark, the cold, the bleak. Very, very, depressing.

I know why we have it, it is a forced rest, a respite from growth, a deep sleep for all of creation to catch it’s breath. Everything slows down, plants, animals, us. But I don’t want to slow down, I want to keep moving. My clock is ticking and with each passing year the tick tock becomes louder and louder. Very, very, very depressing.

But what choice do I have? None. I will read the books that have been gathering dust on my bedside table. I will start back on the novel I began writing last year when the dark engulfed me then. I will rediscover my workshop and the scraps of wood waiting for me to fashion them into Christmas gifts for my family. I will go to bed early because the dark always overrules what the clock says. I will prepare for a new season, new opportunities, new growth with my spirit recharged and my sights set on the light rather than the darkness that surrounds me.

“Summer is gone with all its infinite wealth, and still nature is genial to man. Though he no longer bathes in the stream, or reclines on the bank, or plucks berries on the hills, still he beholds the same inaccessible beauty around him.” – Henry David Thoreau

I am a frustrated writer and poet waiting to be discovered. A stand-up philosopher performing on a street corner near you. A Christian with questions but I don’t want to hear your answers. A Buddhist with a bumper sticker on my truck to prove it. A collector of quotes. A grower of lettuce. The Patron Saint of earthworms who name their children after me. A cyclist whose big ass strains the seams of his Lycra bibs. I am American by birth, Southern by the grace of God. My goal in life is to leave an imprint on the lives of the people I love not a footprint on the earth. I am a son, a husband, a father composed of 65%-Oxygen, 18%-Carbon, 10%-Hydrogen, 3%-Nitrogen, 3%-Diet Coke and 1%-Oreo.
View all posts by ends and beginnings blog →
This entry was posted in discover wp, Life, Thoughts, Writing and tagged Cycling, Daylight, daylight savings, Future, growth, Henry David Thoreau, Night, Seasons, Sun, Sunshine. Bookmark the permalink.

3 Responses to The fading sun