The viewpoint of my view

Posted on November 16, 2016 by ends and beginnings blog 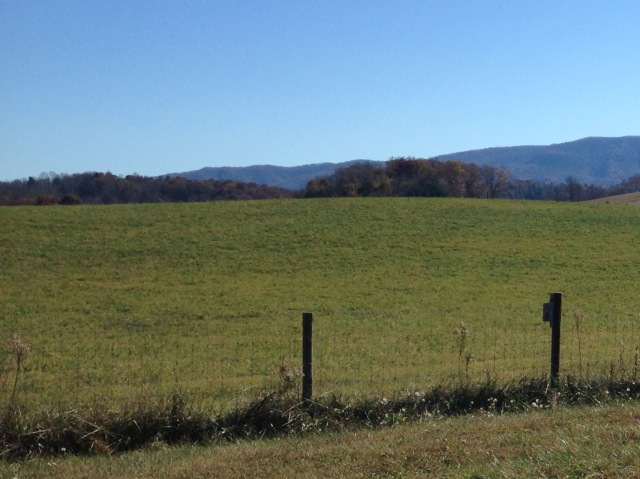 What do you see? How does this image make you feel? When I stopped to take this picture I was 40 miles into a very cold 60 mile mountain bike ride. I can tell you that where I stood was very beautiful and very quiet. Other than my wife, there was not another soul around. Five minutes later, with my phone already secured in my backpack, a mother deer and her two babies walked to the top of this knoll briefly. She looked at us, we looked at her and then she walked back down with her babies.

This is my image of paradise. This is the picture I would love to wake up to every morning. It is not a new want, it is something I have wanted all my life, but it has just never happened. Twenty-five years ago my wife and I looked at buying 30 acres of rolling land at the base of the Blue Ridge Mountains. We didn’t have children yet, but we were trying, actually she would be pregnant in three months. Our commute to our jobs in the city would have taken us about 45 minutes one way each day. Moving meant leaving our family who all lived within a mile of our current home, our Church, our friends, in short, our support.

We thought about the isolation, how many goats would we need to get to keep us company. We thought about our future children, what were the schools like, who would our kids play with. We thought about our present, buying the land, building a house would stretch and strain our finances. Eating out, vacations, would all have to be controlled or eliminated. Neither of us were “country” people as my Grandmother called herself. We didn’t know the rules, or the procedures for living in the rural world. That’s not to say we couldn’t have figured it out, but country life is different than city life. In the end we chose to live in the city, where we remain today.

When I stand still and look at vista’s like this I often think back to twenty-five years ago. I wonder how different my life, my families life would have been living on that land far away from the distractions of the city. I wonder what my political views would have been, my religious views. Would they be different from the ones I hold today? Would I have become a deer hunter, as so many of my “neighbors” would have been? First I would have to acquire a taste for deer meat which I haven’t done even to this day. Would I view these creatures as a nuisance as so many in rural America do rather than majestic animals? Would I own a gun? I don’t own a gun, I don’t like guns, I don’t like blood or killing things for that matter either which might have been a problem deer hunting.

So here I sit, in my 3,000 square foot house close to downtown with a view of my neighbors 3,000 square foot house. My livestock includes two dogs and a cat. I have a .40 acre “pasture” to mow and blow. My in-laws all live within five blocks of my house. Though I never see them I know they are close if we need them, I knew they were close if my kids needed them when they were growing up.

Some would say it’s not too late to get that view and you’re probably right. But that view comes with something else, something just as tangible, a viewpoint. I am not sure mine would fit within the confines of just 30 acres any longer. I would probably need more, a lot more, at least 100. My views would need space away from the other views. Enough space that to hear mine or share yours would require an effort, a long drive down a dusty gravel road. If you are reading this, thank you for making the trip.

I am a frustrated writer and poet waiting to be discovered. A stand-up philosopher performing on a street corner near you. A Christian with questions but I don’t want to hear your answers. A Buddhist with a bumper sticker on my truck to prove it. A collector of quotes. A grower of lettuce. The Patron Saint of earthworms who name their children after me. A cyclist whose big ass strains the seams of his Lycra bibs. I am American by birth, Southern by the grace of God. My goal in life is to leave an imprint on the lives of the people I love not a footprint on the earth. I am a son, a husband, a father composed of 65%-Oxygen, 18%-Carbon, 10%-Hydrogen, 3%-Nitrogen, 3%-Diet Coke and 1%-Oreo.
View all posts by ends and beginnings blog →
This entry was posted in discover wp, Life, Thoughts, Writing and tagged farm, land, Mountains, Opinion, paradise, Past, rural, viewpoint, Views, Wonder. Bookmark the permalink.

16 Responses to The viewpoint of my view