A small view of a big world

Posted on February 16, 2017 by ends and beginnings blog

“It suddenly struck me that tiny pea, pretty and blue, was the Earth. I put up my thumb and shut one eye, and my thumb blotted out the planet Earth. I didn’t feel like a giant. I felt very, very small.” – Neil Armstrong

This is the view from atop Looking Glass Rock in the Pisgah National Forest. To get to this point I hiked 3.2 miles and climbed 1,700 feet two weeks ago. The hike is steep, rocky and rough but this sight is the payoff.

I love the mountains. I love the isolation they offer and the secrets they keep. I am fortunate to live at the foot of the Blue Ridge Mountains, a range that runs from southern Georgia to northern Pennsylvania. The Blue Ridge Mountains began their formation over 400 million years ago. North America and Europe collided, pushing up the ridge. At one time the Blue Ridge were among the highest mountains in the world, and reached heights comparable to the much younger Alps. Today, due to weathering and erosion over hundreds of millions of years, the highest peak in the range is Mount Mitchell in North Carolina at 6,684 feet high – still the highest peak east of the Rockies. 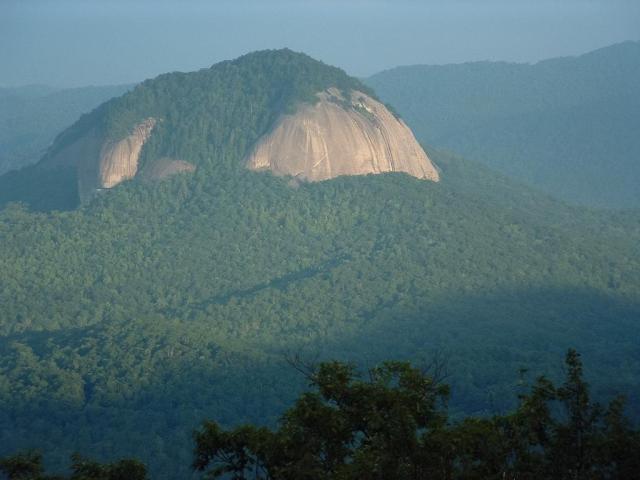 “Our population and our use of the finite resources of planet Earth are growing exponentially, along with our technical ability to change the environment for good or ill.” – Stephen Hawking

When I sit on Looking Glass Rock I think about all the time that has passed and all the living creatures that have come before me. I don’t know how old the earth is, honestly I can’t even wrap my head around 400 million years ago but I do know there is a lot of space in those 400 million years. Space filled with change, dramatic change. Space filled with life and death.

When I think about 400 million years, when I stand on this massive rock and see for miles beyond I feel very small. Whatever self-importance I may feel about myself vanishes. Whatever control I may believe I have over the world disappears. Too many of us live on the Earth rather than with it. We think of the Earth in terms of ownership rather than what each of us truly are, tenants. Sure you may think you own a plot of land somewhere, with a cute little house on it, but do you really?

If I live to be 70 years old I will have occupied less than .0000002% of the space in those 400 million years, nothing. And 400 million years from now, if this planet survives its most destructive inhabitant, human beings, nothing or no one will even know that I had been here.

When I stand on that huge granitic pluton and look out into the hazy distance something tells me that the battles ahead for this planet have already been determined. Humans may scorch, burn and destroy but planet Earth will recover and she will recover without us. She doesn’t need our help to spin on in the cosmos. Her instincts to survive are untamable. She has time on her side, something none of us have and time heals all wounds.

“May your trails be crooked, winding, lonesome, dangerous, leading to the most amazing view. May your mountains rise into and above the clouds.” – Edward Abbey

I am a frustrated writer and poet waiting to be discovered. A stand-up philosopher performing on a street corner near you. A Christian with questions but I don’t want to hear your answers. A Buddhist with a bumper sticker on my truck to prove it. A collector of quotes. A grower of lettuce. The Patron Saint of earthworms who name their children after me. A cyclist whose big ass strains the seams of his Lycra bibs. I am American by birth, Southern by the grace of God. My goal in life is to leave an imprint on the lives of the people I love not a footprint on the earth. I am a son, a husband, a father composed of 65%-Oxygen, 18%-Carbon, 10%-Hydrogen, 3%-Nitrogen, 3%-Diet Coke and 1%-Oreo.
View all posts by ends and beginnings blog →
This entry was posted in Thoughts and tagged Beer, Blue Ridge mountains, earth, environment, Future, hiking, Looking Glass Rock, mountain bike, Mountains, Outdoors, Past, Pisgah National Forest, planet. Bookmark the permalink.

11 Responses to A small view of a big world