Posted on February 21, 2017 by ends and beginnings blog 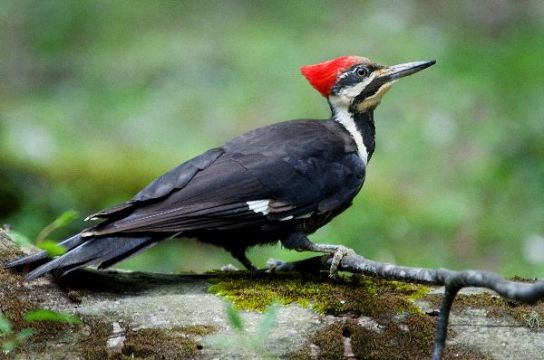 “In every walk with nature one receives far more than he seeks.” –  John Muir

We spent the weekend in a cabin up in woods outside of the DuPont State Forest. There was nothing fancy about the accommodations, a soft bed, a hot shower and a porch with two rocking chairs. Simply perfect.

We had to be out by noon on Sunday but we had planned a hike with a friend at 10 am. I woke up at seven, fixed some eggs and bacon, packed my bag, loaded the car and I was ready to roll. My wife takes a little longer to “roll” than I do but that’s why I love her.

I settled in on one of the rocking chairs and watched the day begin. The cabin was set in a thick grove of leafless oaks and hickory trees. Squirrels and chipmunks were busy rustling through the leaves looking for nuts. Crows called out from distant horizons, relaying messages only crows could interpret. Canadian geese flew in a tight V honking signals to each other as the surveyed the landscape below. These were the sounds of solitude, the sounds of nature, the sounds of a community beginning a new day.

Around 8:30 my wife had finished her coffee and began to stir. I contemplated asking if there was anything I needed to help her with to get her out the door when I heard a familiar hammering sound. There was a woodpecker somewhere searching for breakfast amongst this strand of trees and I was determined to find it.

The sound of a woodpecker is very distinctive but given the vastness of my surroundings it could have been anywhere. I focused on the rhythm, tried to zero in on an area and discovered the sound was right in front me. I followed the line of each tree from the ground up and then I caught a glimpse of red against the gray sky. As the bird worked its way around the trunk I discovered what has become a very rare sight, a Pileated woodpecker.

The previous evening I had heard what I thought was the call of this magnificent bird, a call my grandfather taught me to listen for. It is almost a tropical sound, one that seems out-of-place among the common notes we are used to from crows, jays, and wrens.

I thought about sharing the moment with my wife. I learned later she had never seen one. But there was no guarantee the bird would stay put and it was so close any movement may have spooked it. So I watched, as it methodically worked its way around the trunk of this old oak, hammering bits of bark that scattered on the ground below. And then this massive bird gracefully pushed itself off the tree, spread its wings and flew away.

In fifty-six years this is only my third encounter with this species of woodpecker and I thought at that moment it could possibly be my last. Maybe now that I have more time to wander in the woods as I did with my grandfather when I was a kid I will hear and see another one, maybe.

I am a frustrated writer and poet waiting to be discovered. A stand-up philosopher performing on a street corner near you. A Christian with questions but I don’t want to hear your answers. A Buddhist with a bumper sticker on my truck to prove it. A collector of quotes. A grower of lettuce. The Patron Saint of earthworms who name their children after me. A cyclist whose big ass strains the seams of his Lycra bibs. I am American by birth, Southern by the grace of God. My goal in life is to leave an imprint on the lives of the people I love not a footprint on the earth. I am a son, a husband, a father composed of 65%-Oxygen, 18%-Carbon, 10%-Hydrogen, 3%-Nitrogen, 3%-Diet Coke and 1%-Oreo.
View all posts by ends and beginnings blog →
This entry was posted in discover wp, Thoughts, Writing and tagged Birds, DuPont State Forest, environment, forest, John Muir, memories, Nature, Pileated woodpecker, trees, wildlife, Woods. Bookmark the permalink.