The greatest cooking discovery since fire? 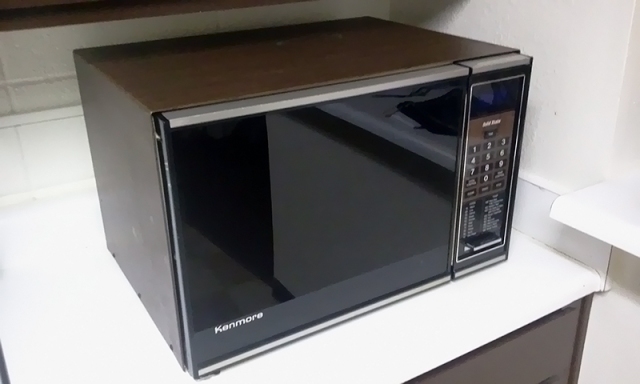 “I put instant coffee in a microwave oven and almost went back in time.” – Steven Wright

I was thinking about Kellyanne Conway’s observation about “microwaves that turn into cameras.” Though I have never heard about this before it did remind me of the first microwave my wife and I owned. We have been married for 32 years and one of the wedding gifts we received was a microwave oven which looked just like the one pictured above.

This contraption was massive and seemed to weigh as much as a VW Beetle. A side story, the next to last time I had to move it I twisted my ankle going up a set of stairs and ended up in the emergency room at midnight. My pregnant wife thought I had broken it which I hadn’t but it did get me out of moving anything else. I supervised the rest of the move from the sofa, ankle elevated with a cold beer in my hand. I sill haven’t lived that one down.

Our first apartment was tiny and the kitchen was about the size of our current walk-in closet. We had a sink, a small two burner stove, a small refrigerator and then this massive appliance with very little counter space. I thought about putting it on two saw horses and using it as a dining room table. Unfortunately that plan was vetoed.

At the time there was all kinds of crazy thoughts and rumors about microwave ovens from causing cancer, and drying poodles to making men sterile if we stood to close. My wife tried many of the recipes included in the manual. Some with success but most were not edible. Typically what we ended up with was chicken warm on the outside and raw on the inside. It was great for boiling water, making soup and warming up leftovers but for the kind of commitment we were making giving it 75% of our counter space it really was a time-saving bust.

For our first five years together this bad boy moved three times and each time I just wanted to leave it where it sat. But my wife wouldn’t allow it. There was something prestigious about having it even if it rarely got used. Few people had one and as we discovered even fewer people knew what to do with it.

My grandmother’s children gave her one of these behemoths for Christmas along with a cart she could roll it around on. A couple of months later I was at her house and asked her how she liked it. She opened the door and inside were all of her cookbooks. She didn’t have to say anything else.

We finally bought a house that had a built-in microwave. One of those slim, small models that had the spinning disk inside. After calling her friends and family to find out if anyone wanted our old one, a universal no from everyone, she allowed me to pick it up and move it one last time to Goodwill who reluctantly accepted it and asked that I stack it “over there” along with 30 or 40 other ones they had on hand. I am guessing it is still there.

“They say you’re not supposed to put metal in a microwave oven. They’re right.” – Steven Wright

I am a frustrated writer and poet waiting to be discovered. A stand-up philosopher performing on a street corner near you. A Christian with questions but I don’t want to hear your answers. A Buddhist with a bumper sticker on my truck to prove it. A collector of quotes. A grower of lettuce. The Patron Saint of earthworms who name their children after me. A cyclist whose big ass strains the seams of his Lycra bibs. I am American by birth, Southern by the grace of God. My goal in life is to leave an imprint on the lives of the people I love not a footprint on the earth. I am a son, a husband, a father composed of 65%-Oxygen, 18%-Carbon, 10%-Hydrogen, 3%-Nitrogen, 3%-Diet Coke and 1%-Oreo.
View all posts by ends and beginnings blog →
This entry was posted in discover wp, Life, Thoughts, Writing and tagged boiling water, cooking, Future, lifestyle, Living, microwave oven, modern, Past, technology, Zen. Bookmark the permalink.

4 Responses to The greatest cooking discovery since fire?