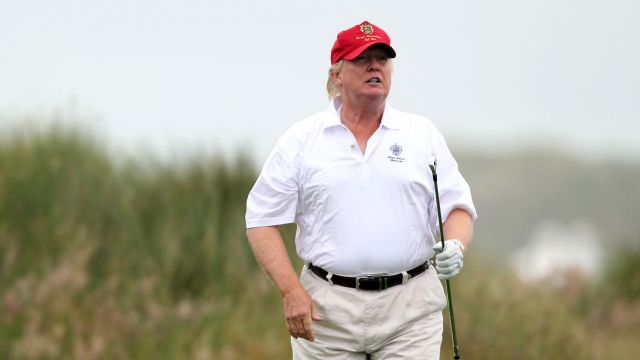 “Heading back to Washington after working hard and watching some of the worst and most dishonest Fake News reporting I have ever seen!” – Donald Trump tweet 8-20-17

“Trump’s travel to his private club in Florida has cost more than an estimated $20 million in his first 80 days in office, putting the President on pace to surpass former President Barack Obama’s eight years of spending on travel — in only his first year in office.” – CNN

USA Today is reporting that the “Secret Service can no longer pay hundreds of agents it needs to carry out an expanded protective mission – in large part due to the sheer size of President Trump’s family and efforts necessary to secure their multiple residences up and down the East Coast.” Do any of you remember this gem of a tweet from our then soon to be President; “We pay for Obama’s travel so he can fundraise millions so Democrats can run on lies. Then we pay for his golf.”? So much winning, so much winning. I am not sure how much more hard work and winning this nation can endure from “our” President.

Trumps trips to Mar-a-Lago are estimated to cost taxpayers at least $3 million each. Hell, the Secret Service has spent $60,000 on golf cart rentals alone this year to protect Trump at both Mar-a-Lago and Bedminster. Ever wonder who they rented those golf carts from?

What do the Deplorables think about all this hard work their President is doing on our behalf? Do you think any of them could use an extra $3 million? Certainly, keeping your handicap low is drudgery, and it takes a lot of rounds of golf. We shouldn’t criticize the man for letting golf cut in to his part-time job, you know, being President of the United States. I mean come on, he is Donald Trump, the guy that is “like, a really smart person”. He has done more in eight months than all of the other 44 Presidents combined. Trump gets more accomplished in his sleep than President Obama got done in eight years. How lucky are we to have him? Want to know, just ask him, very lucky. Hell we don’t deserve him.

Mr. President speaking on behalf of the majority of Americans, please quit working so hard for us. Better yet, you have our permission to just go ahead and retire from your part-time job and work on your golf game. Honestly that is the best thing you can do for yourself and oh yea, the rest of the free world.

“President Obama should have gone to Louisiana days ago, instead of golfing. Too little, too late!”

“While our wonderful president was out playing golf all day, the TSA is falling apart, just like our government! Airports a total disaster!”

“Obama has admitted that he spends his mornings watching @ESPN. Then he plays golf, fundraises & grants amnesty to illegals.”

“President Obama has a major meeting on the N.Y.C. Ebola outbreak, with people flying in from all over the country, but decided to play golf!”

“Can you believe that, with all of the problems and difficulties facing the U.S., President Obama spent the day playing golf. Worse than Carter”

“If Obama resigns from office NOW, thereby doing a great service to the country—I will give him free lifetime golf at any one of my courses!”

I am a frustrated writer and poet waiting to be discovered. A stand-up philosopher performing on a street corner near you. A Christian with questions but I don’t want to hear your answers. A Buddhist with a bumper sticker on my truck to prove it. A collector of quotes. A grower of lettuce. The Patron Saint of earthworms who name their children after me. A cyclist whose big ass strains the seams of his Lycra bibs. I am American by birth, Southern by the grace of God. My goal in life is to leave an imprint on the lives of the people I love not a footprint on the earth. I am a son, a husband, a father composed of 65%-Oxygen, 18%-Carbon, 10%-Hydrogen, 3%-Nitrogen, 3%-Diet Coke and 1%-Oreo.
View all posts by ends and beginnings blog →
This entry was posted in Politics and tagged America, Barack Obama, deplorables, Donald Trump, fake news, Golf, Mar-a-Lago, President, President Obama, Secret Service, Trump, Washington, Winning. Bookmark the permalink.