Sleeping with the Bully

Posted on October 25, 2017 by ends and beginnings blog 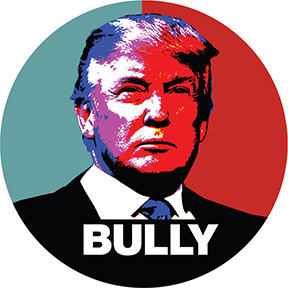 “But we must never adjust to the present coarseness of our national dialogue with the tone set up at the top. We must never regard as normal the regular and casual undermining of our democratic norms and ideals. We must never meekly accept the daily sundering of our country. The personal attacks, the threats against principles, freedoms and institution, the flagrant disregard for truth and decency.

The reckless provocations, most often for the pettiest and most personal reasons, reasons having nothing whatsoever to do with the fortunes of the people that we have been elected to serve. None of these appalling features of our current politics should ever be regarded as normal. We must never allow ourselves to lapse into thinking that that is just the way things are now.” – Senator Jeff Flake, Republican of Arizona

“The reason Flake and Corker dropped out of the Senate race is very simple, they had zero chance of being elected. Now act so hurt & wounded!” – Donald Trump

First Lady Melania Trump kicked off her anti-bullying advocacy this week by telling seventh and eighth-graders that it is “very important to choose kindness and compassion.” This from the woman married to the man who regularly resorts to cruelty, vindictiveness, racism, xenophobia and misogyny as a means of “governing”.

“By our own example, we must teach children to be good stewards of the world they will inherit. We need to remember that they are always watching and listening. It is our responsibility to take the lead in teaching children the values of empathy and communication that are at the core of kindness, mindfulness, integrity and leadership.” – First Lady Melania Trump

Given the continuing actions of her husband it would seem ironic that this would be the advocacy she has chosen to undertake. For me, a better description of her choice would  be clueless, naive, ignorant and better yet just plain stupid.

Donald Trump has given the Bully’s of the world a voice. He has demonstrated that it is okay to pick on the weak, the disabled, blacks, gays, Muslims, and people who have a different political view. It is okay to call people losers, weak, little, lightweights, crazy, goofy, and wacky. This has become the new normal and as Senator Jeff Flake stated on the senate floor yesterday “None of these appalling features of our current politics should ever be regarded as normal.”

I know nothing about Melania Trump other than what I see on the outside, a beautiful and overtly fashionable 47-year-old former model that is the third wife of a rich 71-year-old man. That in itself tells a lot. Maybe this is her way of balancing the scales. Her way of acknowledging that she is married to a classless monster who calls grieving widows lairs, and supports the violence of white supremacists. Maybe.

I don’t know what is in Melania Trump’s heart. Hopefully she is sincere. Hopefully she is smart enough to realize that half of the American population believes she should fix the bullying issue she has in her own home first, the man CNN referred to as the “Bully-in-chief”. Sadly, this campaign has all the appearances of simply something to keep a rich housewife busy, a glorified Junior League project, while the men do the heavy lifting of making America great again.

“You know, people don’t understand. I went to an Ivy League college. I was a nice student. I did very well. I’m a very intelligent person. You know, the fact is, I think, I really believe, I think the press creates a different image of Donald Trump than the real person.” – Donald Trump

The tone of how we treat each other always begins at the top. Trump has created a divisive and hateful environment for many in our society to exist within. He has worked to stifle the voice of all that oppose his brand of politics and he does so with insults from the most powerful bully pulpit imaginable. Maybe Melania has a super secret evil plan to fix the most glaring roadblock I see to eliminating bullying, her husband. Or maybe this is just another photo-op to promote her line of designer clothing.

“Mrs. Trump should also move beyond platitudes and recognize that bullying often reflects other social dynamics and hierarchies, including misogyny, racism, classism and homophobia. Girls are still sexually harassed and even assaulted at school, children are attacked for their skin color, kids bully each other for being too rich or too poor and kids who are gay or perceived as gay remain targets of awful abuse.” – CNN

I am a frustrated writer and poet waiting to be discovered. A stand-up philosopher performing on a street corner near you. A Christian with questions but I don’t want to hear your answers. A Buddhist with a bumper sticker on my truck to prove it. A collector of quotes. A grower of lettuce. The Patron Saint of earthworms who name their children after me. A cyclist whose big ass strains the seams of his Lycra bibs. I am American by birth, Southern by the grace of God. My goal in life is to leave an imprint on the lives of the people I love not a footprint on the earth. I am a son, a husband, a father composed of 65%-Oxygen, 18%-Carbon, 10%-Hydrogen, 3%-Nitrogen, 3%-Diet Coke and 1%-Oreo.
View all posts by ends and beginnings blog →
This entry was posted in Politics and tagged Bob Corker, Bully, Bullying, Donald Trump Jr, Hate, homophobia, Jeff Flake, Melania Trump, misogyny, Normal, Racism, Trump, xenophobia. Bookmark the permalink.

13 Responses to Sleeping with the Bully