Posted on February 5, 2018 by ends and beginnings blog 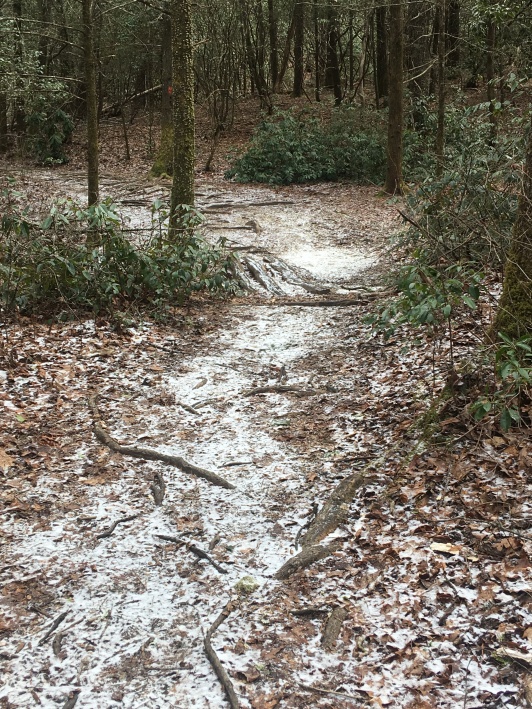 “I go to nature to be soothed and healed, and to have my senses put in order.” – John Burroughs

There is a small, family owned Mexican restaurant in our community that my family has enjoyed eating at for 30 years. When my wife was pregnant with our first child all she wanted to eat was french fries and onion rings. For our second, burritos at this little Mexican restaurant. Given how often we ate out during her pregnancies I was relieved that she didn’t deliver an onion ring the first go round and a burrito the second.

We were eating there Friday night trying to figure out what we were going to do Saturday. Sunday was forecasted to be a washout, sleet in the morning changing over to rain by midday. Both days were going to be cold, high’s in the upper 30’s. I had taken riding our bicycles off the table. I have all the clothes and gear to ride in the cold but I have simply lost the will. I don’t mind gritting my teeth and riding through the pain, suffering is a key component of riding a bicycle, but I no longer consider freezing fingers and toes suffering but cruel and unusual punishment for an old man.

Since we hadn’t been up to Pisgah National Forest in a couple of months to hike I suggested we do that, specifically the Pink Beds hike, a relatively flat six-mile loop. I knew it would be colder in the mountains than at home but the difference between hiking and pedaling a bicycle in the cold is on the bike you create wind, cold wind at that, and provided you walk briskly and dress in layers, hiking in the cold is a breeze, no pun intended.

Over the last few years I have seen Pink Beds, named for pink wildflowers that appear in the spring, including clover, mountain laurel and rhododendron, in all matter of cover from the brown and orange leaves in the fall to the green grasses in the summer but never snow, which made our Saturday adventure such a treat.

There were very few people on the trail Saturday, less than six. The snow offered a unique canvas of all the non-human activity that occurred in the woods. Deer tracks filled the edges of the trail. Near the water edges, beavers dragged their tails in the snow and mud searching for fresh pulp to take back to their dens. And though I wouldn’t stake my life on it, I also saw paw prints that appeared large enough to have been made by a bear or a really big dog. I decided we didn’t need or want to meet either.

Winter, for most, is simply not as sexy as the birth of Spring or the colors of Fall but as John Burroughs noted; “He who marvels at the beauty of the world in summer will find equal cause for wonder and admiration in winter.” Though the forest seems a sleep under a blanket of white, this perception is simply a guise, a false sense of solitude. Below the surface is a bustle of activity. Beneath the snow, and a seasons worth of leaves and pine needles there is warmth and life stirs waiting for that singular moment, a moment as ancient as the earth itself.

I needed this walk in the woods Saturday. I needed to be reminded that life is more than “Summer nights and long warm days”. I needed to be reminded that seasons exist for a reason, not to torture us, or to remind of us how much we hate to rake leaves, or scrap ice off our windshields in the morning. Winter exist to give us space to breathe, to reflect, and to take stock of the moments behind us, and moments ahead. Winter prepares us for growth, for change, and for ends and beginnings.

“I took a walk in the woods and came out taller than the trees.” – Henry David Thoreau

I am a frustrated writer and poet waiting to be discovered. A stand-up philosopher performing on a street corner near you. A Christian with questions but I don’t want to hear your answers. A Buddhist with a bumper sticker on my truck to prove it. A collector of quotes. A grower of lettuce. The Patron Saint of earthworms who name their children after me. A cyclist whose big ass strains the seams of his Lycra bibs. I am American by birth, Southern by the grace of God. My goal in life is to leave an imprint on the lives of the people I love not a footprint on the earth. I am a son, a husband, a father composed of 65%-Oxygen, 18%-Carbon, 10%-Hydrogen, 3%-Nitrogen, 3%-Diet Coke and 1%-Oreo.
View all posts by ends and beginnings blog →
This entry was posted in Life, Thoughts, Writing and tagged Cycling, Fall, Henry David Thoreau, hiking, John Burroughs, Pink Beds, Pisgah National Forest, Seasons, Spring, Summer, Winter. Bookmark the permalink.

5 Responses to A winter’s tale