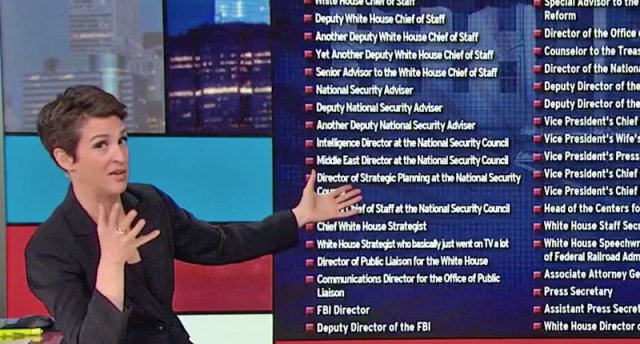 If you watch the Rachel Maddow show on MSNBC you have seen her list of high-level Trump administration departures which, in less than fourteen short months, has grown to three columns in length.

After he fired Secretary of State Rex Tillerson via Twitter yesterday, Trump indicated other heads were likely to roll and “He” would finally get the cabinet he wanted. Think about that statement for a minute. What is the single common thread in his former and current cabinet appointments? Any guesses? That’s right, Donald Trump. You see, he picked all of these people. They were his choices, and fourteen months later, well I guess someone must have just messed-up. We know it wasn’t Trump. He is the most successful and certainly the smartest person to have ever graced the threshold of the White House. So what could it be? Is it possible that some of these people were never qualified from the very beginning? Or maybe they were to smart?

Here is a list, in no particular order, of who could possibly be headed out the door next;

If that seems like a lot of people in less than fourteen months, it is. Should it tell you anything about the buffoon we have in Washington? Yes. Do any of you honestly believe that Trump can find “the best” people to work, not with him because he doesn’t want people who will work with him but for him. No, he can’t. After just watching the Rex Tillerson cluster you-know-what, why would any man or woman with a grain of sense or self-worth want to be subjected to the circus this moron is directing? They wouldn’t.

My Rat Terrier, Belle, would have been a better choice than either Ben Carson and Betsy DeVos. In my mind the same can be said of Interior Secretary-Ryan Zinke, Environmental Protection Agency Administrator-Scott Pruitt, Transportation Secretary-Elaine Chao, Administrator of the Small Business Administration-Linda McMahon and Labor Secretary-Alex Acosta but Trump didn’t consider Belle. Maybe he should have. I would gladly ship her off to Washington. She drives me and the Rhodesian Ridgeback nuts.

H.R. McMaster and John Kelly, like Rex Tillerson, didn’t and don’t need the aggravation of being on Trump’s staff. These are men who have already had long, distinguished and successful careers in government and business. They serve this country out of a sense of duty for the citizens of this nation not out of some obligation for“our” President. And in typical Trump fashion “our” President used that sense of duty against them. Their pledge of loyalty, their oath of faithfulness has to be to him and him alone anything less than that, in Trumps mind, is treason.

So who is next? Donald Trump would get my vote! How about you?

I am a frustrated writer and poet waiting to be discovered. A stand-up philosopher performing on a street corner near you. A Christian with questions but I don’t want to hear your answers. A Buddhist with a bumper sticker on my truck to prove it. A collector of quotes. A grower of lettuce. The Patron Saint of earthworms who name their children after me. A cyclist whose big ass strains the seams of his Lycra bibs. I am American by birth, Southern by the grace of God. My goal in life is to leave an imprint on the lives of the people I love not a footprint on the earth. I am a son, a husband, a father composed of 65%-Oxygen, 18%-Carbon, 10%-Hydrogen, 3%-Nitrogen, 3%-Diet Coke and 1%-Oreo.
View all posts by ends and beginnings blog →
This entry was posted in Politics and tagged cabinet, departures, deplorables, Donald Trump, fake news, MAGA, President, President Trump, Rachel Maddow, Rex Tillerson, treason, Trump, White House. Bookmark the permalink.

8 Responses to Who is next?