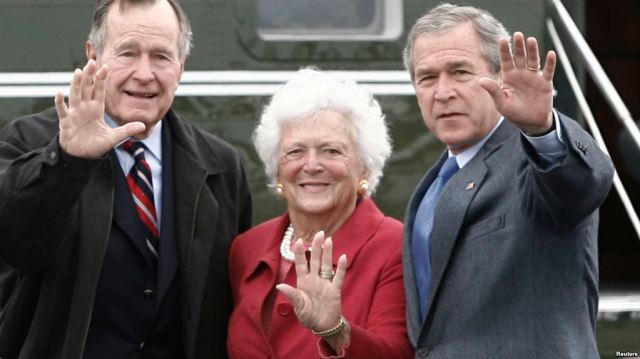 “Never lose sight of the fact that the most important yardstick of your success will be how you treat other people – your family, friends, and coworkers, and even strangers you meet along the way.” –  Barbara Bush

“To us, family means putting your arms around each other and being there.” – Barbara Bush

Barbara Bush, former first lady and mother of a President died yesterday at the age of 92 and as we would expect, she went out on her own terms. It doesn’t matter what you thought of her husband or her son as Presidents, Barbara Bush was a rock, a foundation not only for her family but for this country.

“Never ask anyone over 70 how they feel. They’ll tell you.” – Barbara Bush

There was nothing vain about Mrs. Bush, though she had every reason to be pretentious. We didn’t read about the designer brands she wore or the movie stars she was friends with. She embraced her role as first lady for what it was, to be an anchor, a calming force and to provide balance not only for the President but for our country as well.

“Somewhere out in this audience may even be someone who will one day follow my footsteps, and preside over the White House as the president’s spouse. I wish him well!” – Barbara Bush

People who knew her described her as smart, very funny with a wicked sense of humor, caring, compassionate, but most of all, tough as nails. One of her granddaughters referred to her as the “Enforcer” someone who you didn’t want to disappoint. I can imagine what she would say, words I have heard from my own Barbara Bush’s over the years; “I am not mad, just disappointed”.

“I don’t think that’s healthy for the country when anyone thinks their morals are better than anyone else’s.” – Barbara Bush

“People who worry about their hair all the time, frankly, are boring.” – Barbara Bush

I am a frustrated writer and poet waiting to be discovered. A stand-up philosopher performing on a street corner near you. A Christian with questions but I don’t want to hear your answers. A Buddhist with a bumper sticker on my truck to prove it. A collector of quotes. A grower of lettuce. The Patron Saint of earthworms who name their children after me. A cyclist whose big ass strains the seams of his Lycra bibs. I am American by birth, Southern by the grace of God. My goal in life is to leave an imprint on the lives of the people I love not a footprint on the earth. I am a son, a husband, a father composed of 65%-Oxygen, 18%-Carbon, 10%-Hydrogen, 3%-Nitrogen, 3%-Diet Coke and 1%-Oreo.
View all posts by ends and beginnings blog →
This entry was posted in Discover, Life, Politics, Thoughts, Writing and tagged Barbara Bush. Bookmark the permalink.