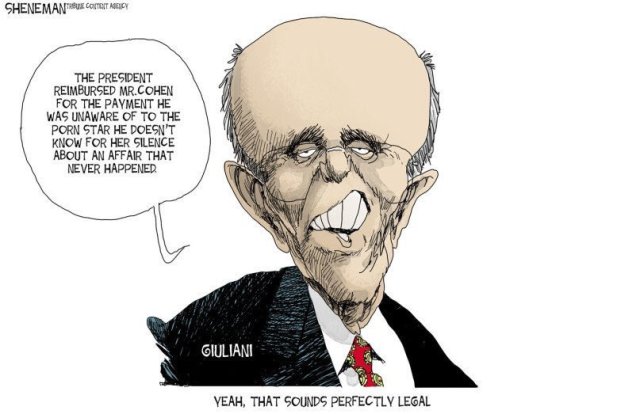 “To the great people of West Virginia we have, together, a really great chance to keep making a big difference. Problem is, Don Blankenship, currently running for Senate, can’t win the General Election in your State…No way! Remember Alabama. Vote Rep. Jenkins or A.G. Morrisey!” – Trump tweet 5-7-18

Tomorrow there are Republican Senate primaries in Indiana, Ohio and West Virginia but the race I am really interested in watching is the West Virginia contest. The primary will determine who will run against a sitting Senator, moderate Democratic Joe Manchin.

Don Blankenship, one of three Republican candidates, is a former coal mine executive  who spent a year in jail following the 2010 explosion at his Upper Big Branch Mine that killed 29 workers. Blankenship is a dirt clod, a scumbag and if the West Virginia Deplorables aren’t smart enough to run the hell away from a man who was responsible for the deaths of their family and friends, heck they deserve him.

Blankenship and “Remember Alabama” Roy Moore demonstrate what having a bombastic and chaotic “leader” like Trump is doing to the GOP. Basically the Republican party is like a boat without a keel sailing in circles. Trumps GOP agenda is just a bunch of pompous words and pretentious slogans with no substances and worst of all, no plan or course of action. Blankenship, like Roy Moore, is running on Trumpism. In fact it would be safe to say that Blankenship is more Trumpish than Trump or as he described himself recently “Trumpier than Trump”.

I want Blankenship to win the primary just so I can watch how the GOP handles this candidate. If you remember with Moore down in Alabama, the GOP threw their support behind him then withdrew but then had to come back with their tail between their legs because Trump endorsed the little Alabama cowboy. The GOP scrambled to put lipstick on a pig with Moore but with Blankenship they will have to do a full facial, lipstick, mascara and blush. Hell maybe even plastic surgery.

Trump won West Virginia by a landslide (68%) and I would suspect a more moderate Republican candidate could probably defeat Democratic Joe Manchin by a safe margin as well. What Blankenship has going for him that Roy Moore didn’t is that West Virginia is a very rural state meaning not many of those uppity city dwellers with college degrees to contend with. But I do believe there are enough educated redneck Deplorables in West Virginia that would see a vote for Blankenship as just adding to the chaos Trump has already created in Washington.

Clearly the Dumb-Ass in Chief created this issue for the GOP. It is one thing to divide the nation down party lines, it is entirely another to divide the party in half that got you elected which is what he has done with the Republican party. Trump has made zero effort in unifying this country and even less effort in bringing the GOP together.

Don Blankenship is the Trump candidate despite his tweet above. As Blankenship noted in his press release this morning; “The President is a very busy man and he doesn’t know me, and he doesn’t know how flawed my two main opponents are in this primary. The establishment is misinforming him because they do not want me to be in the U.S. Senate and promote the President’s agenda.”

Trumps underlying agenda at this point for not supporting Blankenship, a candidate like Roy Moore he would otherwise support? His impeachment from office. Trump needs the numbers and right now the numbers are stacking-up against him come November.

“Is this Phony Witch Hunt going to go on even longer so it wrongfully impacts the Mid-Term Elections, which is what the Democrats always intended? Republicans better get tough and smart before it is too late!” – Trump tweet 5-7-18

I am a frustrated writer and poet waiting to be discovered. A stand-up philosopher performing on a street corner near you. A Christian with questions but I don’t want to hear your answers. A Buddhist with a bumper sticker on my truck to prove it. A collector of quotes. A grower of lettuce. The Patron Saint of earthworms who name their children after me. A cyclist whose big ass strains the seams of his Lycra bibs. I am American by birth, Southern by the grace of God. My goal in life is to leave an imprint on the lives of the people I love not a footprint on the earth. I am a son, a husband, a father composed of 65%-Oxygen, 18%-Carbon, 10%-Hydrogen, 3%-Nitrogen, 3%-Diet Coke and 1%-Oreo.
View all posts by ends and beginnings blog →
This entry was posted in Politics and tagged congress, deplorables, Don Blankenship, Donald Trump, GOP, impeach, impeachment, Remember Alabama, Republicans, Roy Moore, Senate, Trump, West Virginia. Bookmark the permalink.