Posted on December 30, 2018 by ends and beginnings blog 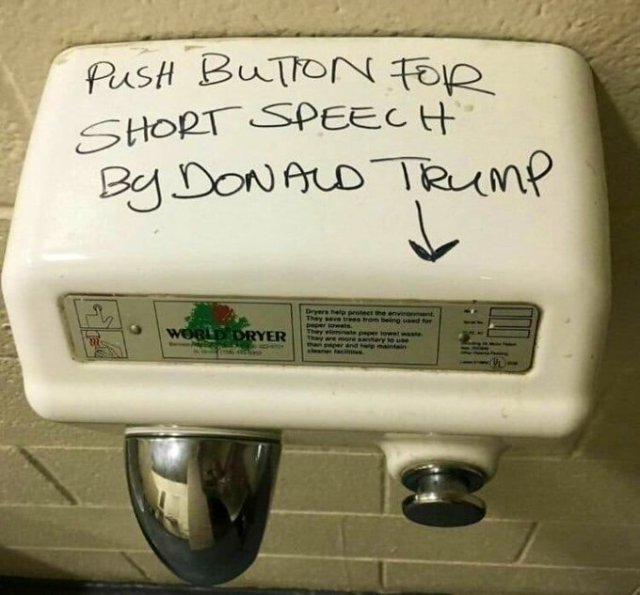 We will begin a new year in a couple of days and our Dumbass-in-Chief will have two years under his sizable belt. All though his fat, wide ass, belly and hair have grown exponentially, his mental capacities as a world leader haven’t grown one inch in those two years. Trump was unprepared to be President and continues, and refuses to be prepared even today.

To prove it, he has spent the entire holiday tweeting like a 15-year-old mean girl who didn’t make head cheerleader or get enough votes to be the most popular girl in the yearbook. In short, he is acting like a fat, old, BITCH. That, Deplorable Nation, is your President, and your Pope, Evangelical Nation.

When I look into my Crystal Ball here is what I expect in 2019 from our orange fat boy, more lies, more bitching, more hysteria, more redneck, ego rally’s and a hell of a lot more golf. And sadly, we should all be prepared for one more thing, Deplorable violence. Violence that Trump will not only encourage but instigate. Violence that he won’t condone, wink, wink, but violence that he will embolden his knuckle dragging redneck base to perform on his behalf.

With Democrat control of the House starting January 3rd I believe Robert Mueller will begin dropping one bomb after another on top of Trump, his crime family and associates. And even if Trump had him fired tomorrow, Mueller has enough cases, open and sealed, farmed out among other jurisdictions (namely the Southern District of New York and Eastern District of Virginia) to prevent his investigation and work from concluding. Also, the FBI isn’t going to stop. They know crimes have been committed and they will continue their investigations and prosecutions even if Mueller is removed. But if one of those Mueller “bombs” drop on Jr., Eric, Jared, or Ivanka expect him to be fired immediately, though it will be too late to save their sorry asses, and the Deplorable violence and anarchy will begin which Trump will fan and fuel because that is all he has left.

My friends, 2019 looks to be a very tumultuous and maybe even a scary year but we will survive. Keep in mind that this nation has endured other horrible Presidents, and overcome worst situations. What will make this one “different” is that it will play out in front of us, in real-time. But it will be okay, I promise and we, as a nation, will be stronger for it.

Happy New Year. God Bless each of you and fuck Donald Trump and his Deplorable base of white, angry, morons. Peace.

I am a frustrated writer and poet waiting to be discovered. A stand-up philosopher performing on a street corner near you. A Christian with questions but I don’t want to hear your answers. A Buddhist with a bumper sticker on my truck to prove it. A collector of quotes. A grower of lettuce. The Patron Saint of earthworms who name their children after me. A cyclist whose big ass strains the seams of his Lycra bibs. I am American by birth, Southern by the grace of God. My goal in life is to leave an imprint on the lives of the people I love not a footprint on the earth. I am a son, a husband, a father composed of 65%-Oxygen, 18%-Carbon, 10%-Hydrogen, 3%-Nitrogen, 3%-Diet Coke and 1%-Oreo.
View all posts by ends and beginnings blog →
This entry was posted in Politics and tagged 2019, Bitch, crystal ball, Democrats, deplorables, Donald Trump, Evangelicals, Fuck Trump, President Trump, Robert Mueller, Trump, White people. Bookmark the permalink.