Letter to my Senators – feel free to use 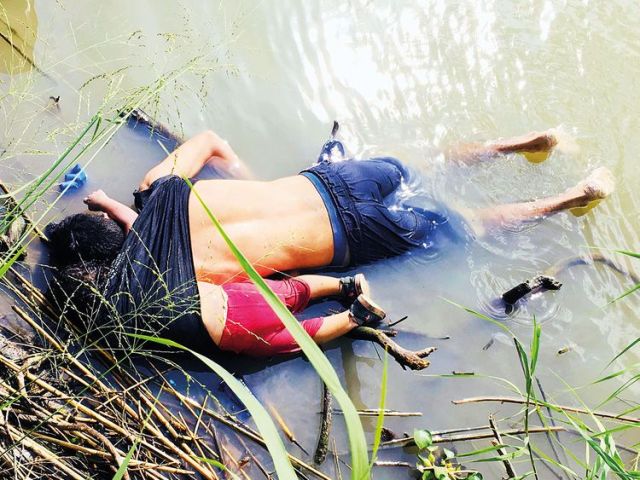 “We have people coming into the country or trying to come in, we’re stopping a lot of them, but we’re taking people out of the country. You wouldn’t believe how bad these people are. These aren’t people. These are animals.” – Trump 5-15-18

Senator, when you are sitting in the nursing home with a Latin-American caregiver spoon feeding you apple sauce, wiping the slobber off your face and changing your diaper this image STILL WON’T BE THE DEMOCRATS FAULT, IT’S YOURS. It’s yours because you allowed an immoral, corrupt, and decadent man with no sense of compassion, empathy or Judeo-Christian ethics or values to operate without any repercussions, consequences or oversight.

Just as the image of the “Napalm girl” defined Johnson & Nixon’s connection to the Vietnam War this tragic image will define yours and Trump’s callous immigration position for generations to come. When my grandchildren see this picture of Oscar Martinez Ramirez and his 23-month-old daughter Valeria in their history books I will tell them that my representatives, you, did nothing to prevent it from happening. Your response to this tragedy was a curt Tweet, and an appearance on Fox News to blame someone else.

Senator, when Jesus ask you, “Why didn’t you do something to prevent the deaths of My two children?” do you think, “It’s the Democrats fault” will be the answer He is looking for?

I am a frustrated writer and poet waiting to be discovered. A stand-up philosopher performing on a street corner near you. A Christian with questions but I don’t want to hear your answers. A Buddhist with a bumper sticker on my truck to prove it. A collector of quotes. A grower of lettuce. The Patron Saint of earthworms who name their children after me. A cyclist whose big ass strains the seams of his Lycra bibs. I am American by birth, Southern by the grace of God. My goal in life is to leave an imprint on the lives of the people I love not a footprint on the earth. I am a son, a husband, a father composed of 65%-Oxygen, 18%-Carbon, 10%-Hydrogen, 3%-Nitrogen, 3%-Diet Coke and 1%-Oreo.
View all posts by ends and beginnings blog →
This entry was posted in Politics and tagged Christian, Democrats, Donald Trump, Evangelicals, Fox News, immigration, Jesus, Lindsey Graham, Oscar Martinez Ramirez, Republicans, SC, Senator, South Carolina, Tim Scott, Trump, Valeria. Bookmark the permalink.

5 Responses to Letter to my Senators – feel free to use