Posted on January 15, 2020 by ends and beginnings blog

Powerful and tremendous are two of Trumps favorite adjectives. Why? Because The Donald thinks of himself in those terms. What Trump likes to project is a “force of nature” persona, bigger, smarter, and tougher than all of us combined. But what we have also learned about him is that he is incredibly insecure hence the bullying, the nicknames and the disparaging remarks he makes about anyone and any institution that calls his bluff.

In his book “Think Big” Trump writes (yea okay I know that sounds like a stretch) that “The world is a vicious and brutal place. Even your friends are out to get you. They want your job, they want your house, they want your money, they want your wife, and they even want your dog. When people wrong you, go after those people, because it is a good feeling and because other people will see you doing it. I always get even.”

Maybe I missed “When people wrong you, go after those people” in the Beatitudes. I mean, the Evangelicals view Trump as the second coming of Christ, the prophet, the leader ordained by God Herself. I guess in the King Franklin Graham version of the bible “When people wrong you, go after those people” replaces “Blessed are you when men revile you and persecute you and utter all kinds of evil against you falsely on my account. Rejoice and be glad, for your reward is great in heaven, for so men persecuted the prophets who were before you.” That makes perfect sense doesn’t it? Sounds just like the Jesus the Evangelicals know and love.

But back to powerful and tremendous, I am fascinated by the ever increasing cast of Congressmen, Senators, charlatans, and thugs who are drawn to Trump like a moth to a flame. And because Lindsey Graham is “my” Senator I have had a front row seat watching an otherwise moderate, level-headed politician be transformed into a snarling, sniveling, irrational and unstable pit bull to protect the man he perceives as our duly elected King.

An article in Rolling Stone magazine titled How Lindsey Graham Lost His Way published the following analysis of Graham by Republican strategist Steve Schmidt, a man that knows him well. Schmidt said; “People try to analyze Lindsey through the prism of the manifest inconsistencies that exist between things that he used to believe and what he’s doing now. The way to understand him is to look at what’s consistent. And essentially what he is in American politics is what, in the aquatic world, would be a pilot fish: a smaller fish that hovers about a larger predator, like a shark, living off of its detritus. That’s Lindsey. And when he swam around the McCain shark, broadly viewed as a virtuous and good shark, Lindsey took on the patina of virtue. But wherever the apex shark is, you find the Lindsey fish hovering about, and Trump’s the newest shark in the sea. Lindsey has a real draw to power — but he’s found it unattainable on his own merits.”

The latest moth making headlines that has fluttered towards Trumps flame is a little-known, scandal-scarred Republican congressional candidate named Robert Hyde. Apparently Mr. Hyde was helping Rudy and his other henchmen stalk, and intimidate former Ukraine Ambassador Marie Yovanovitch (Trump: “she’s going to go through some things”). Before his Ukraine connection was uncovered Hyde was better known for his obscene, oral sex inspired tweet about Sen. Kamala Harris after she dropped out of the presidential race; “She went down, brought to her knees. Blew it. Must be a hard one to swallow….” Yup just look at this Neanderthal. He is a real Deplorable beauty isn’t he? 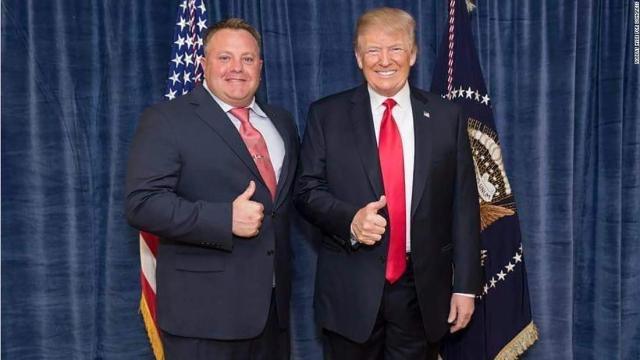 We all know what happens to the moth when it gets too close to the flame. We have certainly seen what has happened to other “Trump moths” like Michael Cohen, Paul Manafort, Roger Stone, Michael Flynn, etc. over the last three years. I expect people like Rudy Giuliani, and Robert Hyde will suffer the same fate. But I also think, once it is all said and done, that heavy weights like Lindsey Graham, Bill Barr, Mike Pence and Mike Pompeo will also pay the price for hovering to close to Trumps flame. The corruption in this administration is too deep, too wide and increasingly becoming very transparent.

And I hear you out there, those voices in the wilderness asking when will all of this sleaziness take down the great orange pumpkin with the cotton candy hair? It’s coming. There isn’t a damn big enough to hold back the flood of bullshit Trump is creating. It’s coming. I promise.

I am a frustrated writer and poet waiting to be discovered. A stand-up philosopher performing on a street corner near you. A Christian with questions but I don’t want to hear your answers. A Buddhist with a bumper sticker on my truck to prove it. A collector of quotes. A grower of lettuce. The Patron Saint of earthworms who name their children after me. A cyclist whose big ass strains the seams of his Lycra bibs. I am American by birth, Southern by the grace of God. My goal in life is to leave an imprint on the lives of the people I love not a footprint on the earth. I am a son, a husband, a father composed of 65%-Oxygen, 18%-Carbon, 10%-Hydrogen, 3%-Nitrogen, 3%-Diet Coke and 1%-Oreo.
View all posts by ends and beginnings blog →
This entry was posted in Politics and tagged Donald Trump, Evangelicals, Franklin Graham, GOP, Jesus, Lindsey Graham, powerful, President Trump, Republicans, Robert Hyde, Rudy Giuliani, tremendous, Trump, Ukraine. Bookmark the permalink.