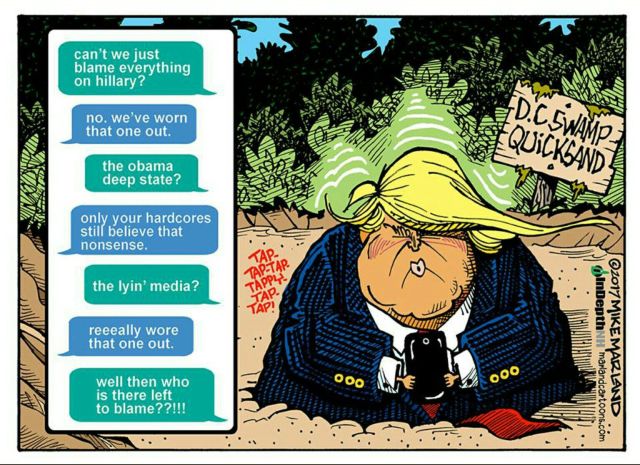 The Donald started tweeting early this morning, 3:35 am to be exact. I guess he had little trouble sleeping given all that was going to happen today. What was happening you ask? Well his former campaign chairman Paul Manafort (“He barely worked on our campaign”) is being sent to prison to await his trails. Yes, that is trails with an “s“. And Trump’s personal attorney Michael Cohen’s (“I haven’t spoken to him in a long time”) soon to be departing legal team has until today to finish reviewing 3.7 million files seized in the FBI raid looking for anything that looks, taste or smells like attorney-client privilege documents. So far, just 162. As it turns out writing checks to porn stars, threatening reporters and trying to shake down corporations for access to the President isn’t considered lawyering.

In the meantime this is what was on the orange wonders mind this morning;

Yup busy, busy morning. Think he is worried? I read all this shit and wonder who is trying to convince himself or the Deplorables? A little of both I suspect. And he did make that “unannounced trip” although once you tweet that your coming, and we knew he would because come-on it was a total set-up, it is no longer unannounced. He joined the Fox & Friends reporter on the front lawn and basically gave us one of his classic, manic Trump meltdowns recapping all the lies above.

And to top it all off, the New York attorney general on Thursday, which just happened to be his birthday, sued his charitable foundation along with its directors — The Donald, his sons Eric and Donald Jr. and daughter Ivanka — alleging they violated state and federal charities law. The AG stated that “As our investigation reveals, the Trump Foundation was little more than a checkbook for payments from Mr. Trump or his business to nonprofits, regardless of their purpose or legality.” So yea, trouble sleeping, I get it. That’s what happens when you build your house on sand, and lies, and deceit and corruption.

So to recap, this is how Trumps week has gone so far;

1. He celebrated his birthday.

2. Michael Cohen is looking for new a attorney to help him cut a deal with federal investigators.

3. Paul Manafort is using his first stainless steel toilet and will probably flip once he finds out they only have single-ply toilet paper in prison and no Charmin.

4. The Trump Foundation slush fund is being sued for corruption.

5. And the state sanctioned television network got to air another classic Trump meltdown.

How was your week?

I am a frustrated writer and poet waiting to be discovered. A stand-up philosopher performing on a street corner near you. A Christian with questions but I don’t want to hear your answers. A Buddhist with a bumper sticker on my truck to prove it. A collector of quotes. A grower of lettuce. The Patron Saint of earthworms who name their children after me. A cyclist whose big ass strains the seams of his Lycra bibs. I am American by birth, Southern by the grace of God. My goal in life is to leave an imprint on the lives of the people I love not a footprint on the earth. I am a son, a husband, a father composed of 65%-Oxygen, 18%-Carbon, 10%-Hydrogen, 3%-Nitrogen, 3%-Diet Coke and 1%-Oreo.
View all posts by ends and beginnings blog →
This entry was posted in Politics and tagged deplorables, Donald Trump, FBI, Fox & Friends, Hillary Clinton, James Comey, meltdown, Michael Cohen, Paul Manafort, Robert Mueller, Russia, Trump, Trump Foundation. Bookmark the permalink.