Posted on September 5, 2019 by ends and beginnings blog 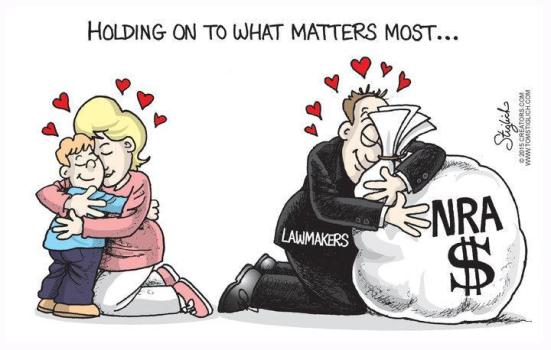 I wrote Walmart thanking them for their recent changes to how the organization sells guns and ammunition. This is the response I received back from them: “I would like to let you know that in response to the horrific events in El Paso, TX and Southaven, MS, we have decided to make changes to our ammunition category. After selling through our current inventory commitments, we will discontinue sales of short-barrel rifle ammunition such as the .223 caliber and 5.56 caliber that, while commonly used in some hunting rifles, can also be used in large capacity clips on military-style weapons. We will sell through and discontinue handgun ammunition. We will discontinue handgun sales in Alaska, marking our complete exit from handguns. Additionally, motivated by our desire to help maintain a safer environment for our customers and associates, we are respectfully requesting that customers no longer openly carry firearms into our stores or Sam’s Clubs in states where “open carry” is permitted – unless they are authorized law enforcement officers.”

This was the NRA’s reaction to Walmart’s decision to change its firearms and ammunition policies: “The strongest defense of freedom has always been our free-market economy. It is shameful to see Walmart succumb to the pressure of the anti-gun elites. Lines at Walmart will soon be replaced by lines at other retailers who are more supportive of America’s fundamental freedoms. The truth is Walmart’s actions today will not make us any safer. Rather than place the blame on the criminal, Walmart has chosen to victimize law-abiding Americans. Our leaders must be willing to approach the problems of crime, violence and mental health with sincerity and honesty.”

Take a close look at the NRA statement. See if you can pick-up on all of the red, white and blue, constitutional, conservative crap. Here, let me help you; defense of freedom, free-market economy, anti-gun elites, fundamental freedoms and law-abiding Americans. Damn, makes you want to go out and buy an AR-15 assault rifle and murder a few beer cans don’t it? No, it doesn’t, at least not me.

When I read this statement it sounds a lot like the short-term tenant we have leasing bedroom space at 1600 Pennsylvania Ave. A moron so convinced that he is “right” he took a sharpie and changed the lines to show the world he has never been wrong in his life. Donald Trump has never uttered the words “I was wrong” and neither has the NRA. Although you and I can see that both are and have been wrong neither will ever admit it because their “success”, their money and their loyal followers depend on their continued defense of being right all cost and at this point the cost is thousands of innocent people murdered.

But of all the buzz words in that NRA statement this is my favorite sentence; “Lines at Walmart will soon be replaced by lines at other retailers who are more supportive of America’s fundamental freedoms.” Right! What bullshit. Do you honestly believe Joe Deplorable in Fort Dodge, Iowa will never, ever set foot in a Walmart again? Sure it might chap his ass that he can’t buy .223 caliber bullets for his AR-15 that shreds bunnies and squirrels up like confetti, but when that chapped ass needs to buy a three pack of tighty whities where is he going to go? Auto Zone? Nope, Joe Deplorable from Fort Dodge, Iowa will head to Walmart and buy a pack of Fruit of the Loom and a Cherry Slush. NRA CEO Wayne LaPierre lives in a Texas mansion and would NEVER buy underwear from Walmart but Joe Deplorable from Fort Dodge, Iowa ain’t got many other options until Home Depot gets into the underwear business.

Things are definitely changing even if the NRA can’t or won’t change. Groups like Moms Demand Action aren’t afraid to go toe-to-toe with NRA, Trump, Moscow Mitch or even the Republican Party as a whole. This grassroots group has money, time, smarts and most importantly lots of members which means voices, lots of voices. I never discount how ruthless, intimidating, and cut-throat old white men can be but I do see a chink in the armor of the NRA which will be proven when Walmart’s sales numbers don’t miss a beat and Joe Deplorable from Fort Dodge, Iowa pushes his buggy down the aisle and sucks on his Cherry Slush.

I am a frustrated writer and poet waiting to be discovered. A stand-up philosopher performing on a street corner near you. A Christian with questions but I don’t want to hear your answers. A Buddhist with a bumper sticker on my truck to prove it. A collector of quotes. A grower of lettuce. The Patron Saint of earthworms who name their children after me. A cyclist whose big ass strains the seams of his Lycra bibs. I am American by birth, Southern by the grace of God. My goal in life is to leave an imprint on the lives of the people I love not a footprint on the earth. I am a son, a husband, a father composed of 65%-Oxygen, 18%-Carbon, 10%-Hydrogen, 3%-Nitrogen, 3%-Diet Coke and 1%-Oreo.
View all posts by ends and beginnings blog →
This entry was posted in Politics, Thoughts and tagged AR-15, Donald Trump, GOP, Gun Violence, Guns, Moms Demand Action, Moscow Mitch, Murder, NRA, Republican Party, Trump, Walmart, Wayne LaPierre. Bookmark the permalink.